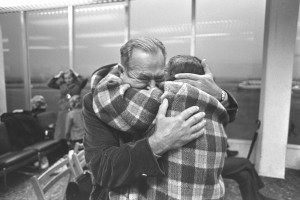 The family-based immigration practice has helped to reunite many families in the United States. Immigrating through a family member who is a U.S. citizen or permanent resident is the easiest and most common path to U.S. residency. John J. Hykel works closely with husbands, wives, fathers, mothers, sons, daughters, sisters and brothers to help them gain entry into the United States. He has helped hundreds of families reunite.

It is possible to immigrate through immediate relatives or other close family members. Immediate relatives of U.S. citizens are given preferential treatment. They include spouses; unmarried children under the age of 21; and parents. Mr. Hykel can help you determine whether you have a qualifying relative. Other close family members of citizens and permanent residents can immigrate, subject to numerical limitations and they include unmarried adult children of citizens; spouses and unmarried children of permanent residents; married adult children of citizens; and siblings of citizens.

A U.S. citizen can file an immigrant visa petition for:

A U.S. lawful permanent resident (that is, a green-card holder) can file an immigrant visa petition for:

At Mr. Hykel’s law offices, we will help you prepare the necessary applications to submit to the USCIS for your specific case. We will begin with the I-130, which is the Petition for Alien Relative. Under our guidance, we will assure that you have the necessary documentation and forms to get your I-130 Petition approved. When the application is filed for an immediate relative not subject to numerical limitation and the relative is in the United States, an application for adjustment of status can be filed as well.

Certain petitions may be filed at U.S. Citizenship and Immigration Services offices abroad, but these locations are limited in number. Mr. Hykel can help you determine whether you can file with a U.S. Embassy outside of the United States. He also handles foreign adoption cases.

Realizing Your Dreams for a New Life in the United States